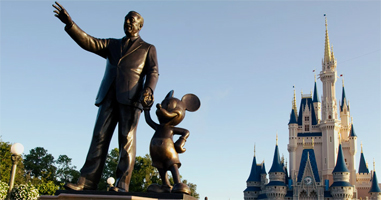 The Magic Kingdom is the first place people think of when Disney is mentioned - in fact, it's probably the best-known theme park in the world and it's officially the busiest. In general, MK is the park aimed at the youngest audience. It is where you will find the greatest Mickey Mouse influence, most of the classic Disney character rides/attractions and most notably that castle that’s in all the photos. This was the original Florida Disney attraction opened in 1971 and because of the age/style of the park and the emphasis on younger visitors, there aren’t many extreme thrills here, but there is plenty to enjoy for people of any age. There are over 40 attractions, and we present only a selection here.

Many of the rides here are similar to those you can find in carnivals and funfairs – carousels, etc - but the one unmissable old-fashioned ride is It’s A Small World. You go on a watery journey through various places in different parts of the “world” in a low boat, surrounded by thousands of tiny dancing puppets, singing in high screechy voices. So sweet your teeth will ache, but it’s just so appealing that even the hardest cynic comes out singing the tune. Other Disney cartoon rides include Dumbo, Peter Pan, Snow White, Alice in Wonderland and Winnie the Pooh.

There are several roller-coasters of vastly different strengths: Big Thunder Mountain Railroad looks like a moderate Wild West trundle around mountains / mines / caves but is very well themed and is actually faster than the notorious Space Mountain, although there are no drops; the gentle Goofy’s Barnstormer is rated a great coaster for smaller kids; Space Mountain feels much more violent but it goes no faster than 28mph – its fame (officially the most popular coaster in the world) is due to the fact that you’re in total darkness apart from the “stars” above, and it’s twisty, so the turns have much more effect than they would in an outdoor coaster; Splash Mountain is a log flume, MK's only water ride, a 10 minute trip with quality animatronics and a Brer Rabbit “story”, and the final drop is rivalled only by Jurassic Park at Universal for speed and length – you will get wet.

Haunted Mansion is a journey on a slowly-spinning-and-turning high seat through all the parts of the mansion – superb movie-set staging, and ghostly holograms stir the imagination – and sometimes the ghosts come and join you in the seat!

Pirates of the Caribbean is the ride of the movie(s). You go on a boat journey through hundreds of animatronic pirates in various dark scenes – sea-battles, ghostly shipwrecks, smuggling, looting and plundering. It’s a ride whose profile has changed hugely in recent years, since the movies were made. Some changes have been made to the “story” to make it more akin to the movies and Captain Jack Sparrow now appears. Not a white-knuckle ride but plenty yo-ho-ho.

On a vaguely similar seafaring note, Jungle Cruise takes you past various animatronic animals from different parts of the world – the tour-guide’s commentary is equal parts cheesy and entertaining.

Buzz Lightyear's Space Ranger Spin is a very colourful, atmospheric indoor ride where your spinning vehicle lets you shoot aliens and save the galaxy with your “laser gun”, scoring points as you go. Competitive, too! See who can score highest.

Stich's Great Escape – an experiment goes wrong, you’re trapped in your chair, the monster is on the loose and….what’s that you feel on your neck?

Mickey's Philharmagic is a 3D sound-and-light musical presentation of many of Disney’s best-known songs by Mickey & Donald and many characters from other films – Little Mermaid, Aladdin, Lion King, among others. The main presentation is on a 150 foot wide, 180 degree screen, to allow for spectacular 3-D effects and the sound and visuals are enhanced by fog, water effects, wind and scents.

Non-ride features : Cinderella’s Castle is great for photos (you’ll get terrific shots from many places), but there aren’t any rides inside it.  Main Street USA is right at the entrance and has various shops, characters and bits of business – a nice introduction to the Disney atmosphere. All around the park at various times and places, you’ll find Mickey, Donald Duck, Goofy and many other Disney characters appearing for autographs and photos.  There’s also a steam locomotive than runs for a mile and a half round a bit of the park (a genuine train from 1928).

Plus : try a shot on the overhead monorail through Tomorrowland – it’s slow and not spectacular, but it takes the weight off your feet as you cruise for several minutes 20 feet in the air. It also takes you inside some of the nearby attractions, including .

Disney is famous for its parades and there are normally two or three a day – one in early/mid-afternoon, the others at night.  The daytime one is a spectacular assembly of dancers, bands and vehicles with Disney characters, which is changed regularly. The night parade generally is less Disney-specific and uses the darkness to produce spectacular light effects, using neon, lasers and all manner of illumination.

Find out much more about Magic Kingdom at http://disneyworld.disney.go.com/parks/magic-kingdom/

Want to see what it's like? OK, then RIDE THE PARKS!

(back to Theme Parks)