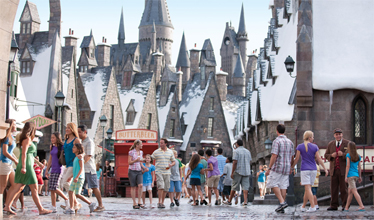 IOA is far more clearly split into separate sections than Universal Studios. In theory, these sections are the "islands" in the park’s name, but in fact they are actually grouped round a central lagoon in standard theme park fashion. Before even reaching the first “island”, however,there is the Port of Entry, the introductory shopping section around the main gate, which itself is elaborately themed in a piratey fashion.

Everything changed for IOA in 2010, when the newest "island", the Wizarding World of Harry Potter, opened.

features some of the best known attractions, including the Incredible Hulk Coaster, which shoots you from 0 to 40mph instantly and then loops you through 360 several times, over the waters of the lagoon. Highly rated by coaster fans.

An even more spectacular ride, however, is the Amazing Spiderman Ride. Combining 3D visuals, startling sensory effects, fabulous environments and jaw-dropping motion, this compares well for thrills to any ride anywhere. Fighting various super-villains high above the streets of , you really feel as if you’re there, plunging and swinging loose at 1000 (apparent) feet.

Dr Doom’s Fearfall, an outdoor zero gravity plunge, reaches 200 (real) feet into the air and lifts and drops riders at will. You can also get to meet costumed superhero characters in this area, or try Storm Force Acceletron, a waltzer on steroids, with a light show.

Toon Lagoon also offers character meetings and sounds very tame by comparison. Certainly, Popeye’s Me Ship The Olive is a kids’ exploration/playground, but the two other feature rides are arguably the wettest around. Bilge Rat Barges is a spinning raft ride and  a rocketing flume but each can guarantee to get you equally and utterly soaking wet. Water fans will love them both.

is a zone built essentially around one ride, Jurassic Park River Adventure. This is a boat ride that follows the same logic as the movie – dinosaurs brought back to life in a jungle paradise, until something goes wrong – then you’re in mortal peril, pursued by several different kinds of prehistoric killer until you have a choice – be crushed by a T-Rex or plunge 85 feet in darkness?

Moving past the prehistoric era brings you to Hogwarts, an amazing recreation of the famous school, surrounded by many of the streets and shops familiar from the JK Rowling books, in the Wizarding World of Harry Potter. As well as shops and dining opportunities, there are three rides, the Dragon Challenge (used to be known as Duelling Dragons), a swooping and diving intertwined double-coaster and Flight of the Hippogriff, a gentle coaster that was formerly called Flying Unicorn. The main attraction, however, is Harry Potter and the Forbidden Journey, an award-winning dark ride through Hogwarts and its environment, using highly-advanced motion simulators, immersive graphics and dramatic action.

The Lost Continent  is loosely themed around myth and legend. The Sindbad stadium/theater live show is colourful good fun, loud and brash, with evil villains casting magic spells, and lots of fire, explosions, swordfights and swinging from ropes around a pirate ship. Poseidon’s Fury is a presentation/show that takes place in several different rooms as you walk through an ancient temple, with some spectacular fire and water effects. The temple building itself is superb, with a massive statue of Poseidon lying broken in bits all around you.

The first (or last) area is Dr Seuss Landing, which is based on the stories of children’s author with several attractions aimed very much at small children. Adults will enjoy the wacky architecture and bold pastel colours, ideal if bright, conventional merry-go-rounds and carousels are your thing. For small children, it is an absolute delight.

More on Islands of Adventure  http://www.universalorlando.com/Theme-Parks/Islands-of-Adventure.aspx

Want to see more? Then RIDE THE PARKS!