New York may be the city that never sleeps, and Paris may be for lovers, but the area around Orlando offers more pure entertainment than anywhere else on earth. Families (and everybody else!) will love the theme parks, the food & drink, the shopping, the weather, the swimming, the shows.....

As well as the famous Disney parks, there is fabulous entertainment to be had at both of Universal's Orlando theme parks and also at Orlando SeaWorld. Slightly further afield is Busch Gardens and there are dozens of smaller attractions in the area. Read on below for a small taste of what these have to offer and click on the links to find out more about each park.

You can also RIDE THE PARKS in our Video sections!

Among the unique features that we offer our guests is a 35-page guide to the theme parks, written by ourselves and packed full of hints, advice and tips. (And if you want to buy great value park tickets, just click on the Undercover Tourist button on any of our theme park pages.)

The four parks that make up Walt Disney World are the most renowned on the planet.

Best known is the Magic Kingdom, centred around Cinderella's castle, where 40 or so rides vary from fairground-style attractions to coasters & simulations. Although everybody will love it, this is the one that kids like best - it's where you get most Mickeys! More on Magic Kingdom.

Epcot Center's giant golf ball is instantly recognisable and the park offers many rides based around the themes of science, education and world travel, with a renowned fireworks show to end each day. More on Epcot.

Disney's Hollywood Studios is an incredible day out for lovers of the movies and TV. Dozens of favourites from large and small screens are recreated in stage performances, thrill rides, stunt spectaculars and magical journeys. More on Disney Hollywood.

Disney's Animal Kingdom is a wonderful trip into the wildlife and natural habitats of all parts of the globe, combined with Disney characters and thrill rides. Journey through the African bush  on the same day as you search for the Yeti on Mount Everest. More on Animal Kingdom.

There are two theme parks in Orlando under the Universal banner.

Universal Studios Orlando specialises in a variety of movie-related attractions, some frantic, others hugely atmospheric and you can experience the magic of ET, Jaws, Terminator 2 (3-D), Men in Black  Revenge of the Mummy, Shrek 4-D and the Simpsons. More on Universal Studios.

Islands of Adventure, on the other hand, has more pure thrill rides and here you can ride The Hulk, Jurassic Park, Spider-Man and enjoy the latest sensation, the Wizarding World of Harry Potter, as well as relaxing in the curvy world of Dr Seuss. More on Islands of Adventure.

Seaworld is based around sea animals, rather than film, TV and thrills. However, there are several thrilling rides, many fascinating animal displays and must-see shows, including Shamu, the world's most famous whale. Seaworld also operates the limited-edition interactive park Discovery Cove and the waterpark Aquatica. More on Seaworld.

While the major parks will take up much of your attention, there are hundreds of smaller (or simply more distant) attractions in and around Orlando. Among those you might wish to check are- 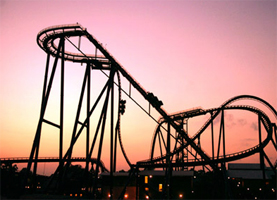 Wet 'n' Wild – Claims to be the best water park in the world, with loads of very spectacular flumes, slides, rides and rafts. Situated on I-Drive.  www.wetnwild.com/orlando

Busch Gardens - An hour or so away in Tampa, this specialises in white-knuckle rides, many of which can compare with the best anywhere, but also doubles as a large zoo with an emphasis on African wildlife.  www.4adventure.com/buschgardens/fla

Legoland Florida - Opened in 2011 on the site of the old Cypress Gardens, and only a short trip from the villa, a park with coasters, rides, shows and, well, LEGO! http://florida.legoland.com/

Gatorland – actually a working alligator farm, but also a zoo with shows and displays.  www.gatorland.com

Ripley's Believe It or Not – a museum of the odd, with weird, bizarre and unlikely displays – the building looks like it's half-collapsed under the ground.  www.ripleysorlando.com

Silver Springs, near Ocala, is a relaxing sub-tropical park with various boat trips through the natural swamps and hot springs. The classic Tarzan movies were filmed here.  www.silversprings.com

Wonderworks – an interactive science, virtual reality and imagination centre, in an incredible building which looks as if it has been ripped from the ground and replaced on top of another - upside down. www.wonderworksonline.com

Kennedy Space Center – The story of space travel, also where they launch real missions beyond our planet. A fascinating tour of NASA, with museums and interactive features, on the coast and near quiet beaches.  www.kennedyspacecenter.com